The Highland Park July 4 parade suspected shooter remained at large hours after the attack Monday before he was arrested following a short car chase, police said.

Following an hours-long manhunt, a person of interest connected to the attack, in which six people were shot and numerous others were injured during a shooting at an Independence Day parade in Highland Park, an affluent suburb of Chicago, was apprehended.

After a brief car chase, Robert Crimo III, 22, was apprehended by police, according to Highland Park Police Chief Lou Jogmen.

The vehicle that authorities had earlier in the day alerted them to as possibly being driven by Crimo was discovered by a North Chicago police officer, according to Jogmen. 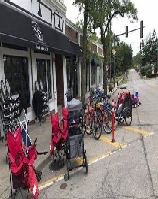 The vehicle that authorities had earlier in the day alerted them to as possibly being driven by Crimo was discovered by a North Chicago police officer, according to Jogmen.

He was expected to be questioned about his alleged role in the mass shooting, the chief said.

Officials stated that Crimo may be connected to the Monday shooting that left at least six people dead and about two dozen others wounded before fleeing from a rooftop perch.

Authorities reported that five of those killed were adults who were discovered at the scene.

Another person passed away after being taken to a hospital.

Who is Robert Crimo? Suspects of Highland Park

Robert E. Crimo III is also known as ‘Awake the Rapper’ and he published a cryptic video in October

Crimo is also known as “Awake the Rapper.”

Crimo began uploading his music to the internet at age 11, but first gained traction with his 2016 track “By The Pond” featuring Atlas, according to IMDB. His estimated net worth is “$100 thousand.”